27/09/2014 Traveller Tip: In these countries, Facebook (including Messenger), Twitter, Youtube and Google (including the play store, Google Drive, Gmail, Hangouts) are likely to be unreachable until you get your VPN working. Don’t rely on these to hold any important travel information, and let people at home know that contact may be difficult until you get it sorted.

A small but very vocal and friendly crowd

We played our second gig last night at the VA Bar and I must say it was probably the most enjoyable gig we’ve done in a long time, including previous tours. Maybe it was because of low expectations – it’s a very small venue and we were on a door deal, meaning we only got a proportion of entry fee for each customer in the bar. Soon after starting to an empty room, a group of four came in and, because they were the only customers at that point, I said “g’day, where are you from?” between songs. They told me that 3 of them were from Ireland and this set up a rappore and allowed us all to relax into what can be best described as more of a conversation with the crowd rather than a presentation. Later on, more people came in until the room was about half full and the band was cooking. We didn’t earn much but it really drew a line in the sand for future gigs. We’ve learned a little more about connecting and we have a benchmark for performance.

We’re also honing our skills on selling merch; apart from getting the brand out there, merchandise such as T-shirts, CD’s etc are the best way to supplement the often meagre earnings from performance. But unless you are a natural salesman, it’s an uncomfortable balance between the audience not even thinking that you have some stuff they might like to buy and detracting from the enjoyment of the gig by sounding like an infomercial. It’s also about getting the whole band into the mindset of mingling and being approachable after the show. 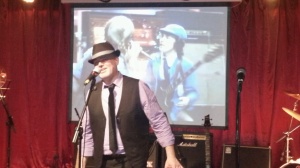